Riding “the Red Wave” with a Smile

by admin
in Ripple
0


If you have bought XRP at the end of December 2017, January 2018, chances are part of your XRP holding is still under water, if you would sell this moment. Yes, I know Dollar Cost Averaging (Dollar-Cost-Averaging is a simple technique that entails investing a fixed amount of money in the same fund or stock at regular intervals over a long period of time; 401K’s use this technique). Still, many people still have a red portfolio (I know in Macau this is considered good, you guys read GREEN)…

Investing in Crypto Currency, your bank, investor or neighbor who is NOT invested, will all tell you: DON’T do it, it is very VERY risky, but YOU know what THEY do NOT know ….. Blockchain is the future, XRP is the future, heck, is the now and the future and yes, although it takes time ….. who is laughing in 2020, 2021, 2022 ! ! !

Another great saying: you only lose money if you sell …. Read it again: DO NOT SELL, if you do not have to. And yes I know, sometimes, you need to, but in the end, it is the long-term strategy that is going to laugh in the face of that neighbor, I know, you know, we all know, that we are going visit, gently knock on his door and laugh at his door for like 45 seconds, the minute XRP is showing us, we are all (secretly) thinking / dreaming of … craving for…

So, we need a laugh, a smile, a happy feeling, that helps us after we stared at the XRP price … I am guilty, I am trying to be positive, I am trying by:

Nothing BUT a Fairy Tale ! ! ! !:
https://xrpcommunity.blog/nothing-but-a-fairy-tale/

Somebody should not pass by without being un-noticed ! ! !

One of XRPCommunity’s Blogger is definitely going for a “I am really funny” price with all the blogs he presents us. I am talking about XRP the Standard Productions (@XRP_Productions).

You must have read his blogs and maybe you have replied to one of his posts: FUD, SOURCE PLEASE, THIS IS FUNNY or of course replying with one of these guys:

Hate him or Love him, but I wanted to know a little more about this guy, so I reached out to him: XRP the Standard Productions:
https://coil.com/u/XRP_Productions 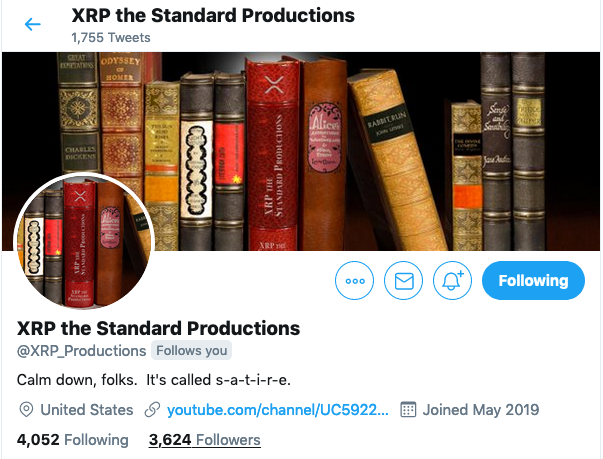 XRP the Standard Productions:
In my day job, I’m an industry professional, though for privacy purposes I will refrain from saying which industry. I started out on XRPChat in the fall of 2017 after becoming enthralled by … XRP/ Ripple, and the pursuit of an Internet of Value. I regularly communicated with Hodor and other community members and soon transitioned to Twitter, which was becoming a great place to get all of the latest scuttlebutt (and to learn from people like David Schwartz and Matt Hamilton).

XRPTwin:
How did you come up with the idea, writing stories about the xrp industry; and why are you doing this?

XRP the Standard Productions:
When I was on XRP Chat, I would regularly think that XRP/ Ripple and the Internet of Value were potentially amazing subjects for short stories and creative projects. We are in the primordial stages of something that could profoundly change the world—how damned exciting and ripe with possibilities! I began a short story contest centered around XRP and had a blast. Many people you may know in the community contributed stories for it (Nordic Ann, JC Collins, Zerpenator, Tom Kuster and XRPTwin …. of course ! ! !).

I soon wrote and personally produced several other stories (with voice actors and illustrators) for fun and released them under ‘XRP the Standard Productions.’ I wanted to capture people’s imaginations and help to expand their view on XRP and the IOV. The productions were very expensive for me personally (with almost no return) and took a great deal of time. 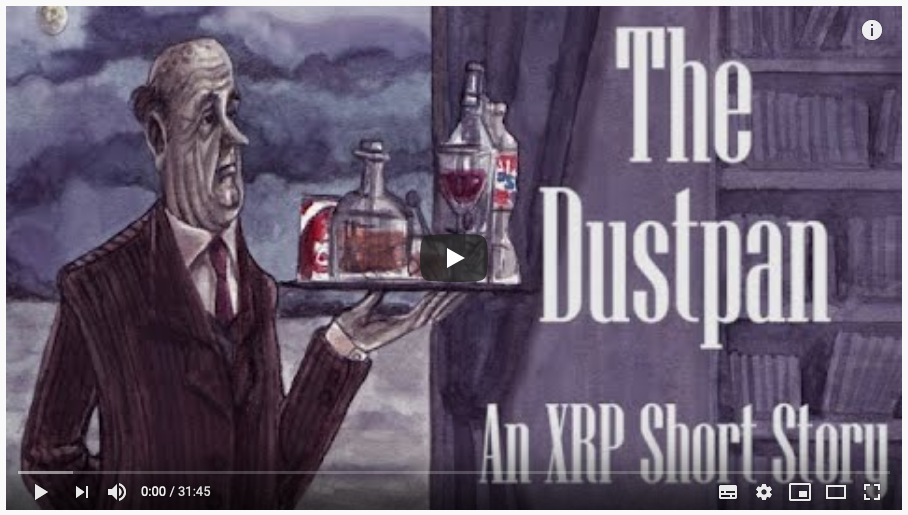 I’ve always been a fan of ‘The Onion’, a satirical news outlet, and one day, I realized that the crypto world is potentially a never-ending source of great satirical content. Everyone who has been in crypto for longer than a week knows that it’s a giant insane-asylum.

XRPTwin:
Obviously you must know a fair deal about the XRPCommunity, to push their buttons, what do you Like more : the guys that love your stories or criticize and belittle you?

XRP the Standard Productions:
Both, equally. It gives me great joy to hear someone say that they laughed out loud at my article. I’m very happy to bring some humor and lighten up their day, if only for a few minutes. BUT I’m also somehow tickled greatly by the people who just react to the headline or who read the articles and don’t ‘get it’. I hold no animosity, but it never ceases to amaze me how many people can be so clueless about satire. Hopefully it is also fun for fans of my stuff to peruse through my Twitter threads to read the negative and confused comments. 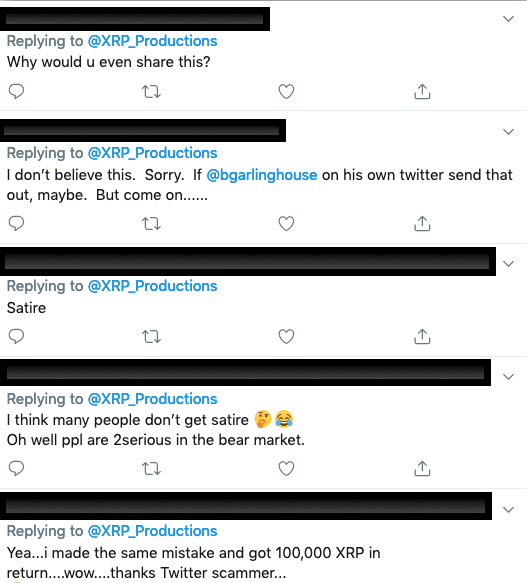 XRPTwin:
How difficult to get new stories out?

XRP the Standard Productions:
Ideas come to me throughout my average day and I normally start by putting a headline in a new blog post on my Coil account cue so that I don’t forget. I then fill in the details as time permits. I’m not a professional writer, but I do feel I’m at least somewhat competent and can simulate a news article close enough for a little satirical endeavor like mine.

XRPTwin:
How many stories are out now?

XRP the Standard Productions:
Since I started posting in mid-November, I’ve tried to have a new story out almost every day. I’d say there are close to 40 satirical articles and counting. It’s tricky, but I’d love to be able to maintain one story a day.

XRPTwin:
What was the most fun article for you?

XRP the Standard Productions:
There were so many that made me laugh as I was typing them. It’s difficult to pick a favorite.
One that definitely comes to mind is the one in which Brad Garlinghouse accidentally sent 60 billion XRP to a Twitter scammer. 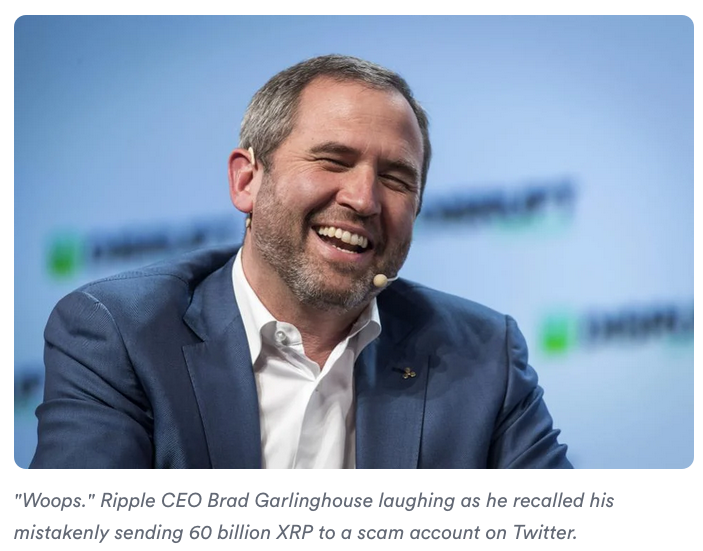 That still kind of cracks me up, especially the following part:
“It looked like David–it had his picture on it and everything,” said Garlinghouse. “So, I admit I got a little excited. I mean, how could I pass up the chance to turn 60 billion XRP into 180 billion XRP? That would’ve been a pretty cool deal.”

I also got a kick out of the fact that David Schwartz himself responded to someone in that Twitter thread who was chastising me. Schwartz said something like, “Brad does that kind of stuff all the time.” That was hilarious and seemed to imply that he understands and likes the satire. That puts a big smile on my face.

I do have to agree with the Standard Productions, the 60 billion transfer to me was the best. Specially because it is a major issue within the XRPCommunity, the fake XRP YouTube Channel. And indeed, major achievement that David Responded on the tweet … he is a sport ! ! !

XRPTwin:
Did you think it would be a hit/ flop before you started?

XRP the Standard Productions:
Hits and flops are all relative, but when I posted the first article, “Congress Unveils Bold 50-Year Fast-Track to Crypto Regulation” I expected a handful of people to chuckle and for most to ignore it. It ended up getting 52,000 Twitter impressions and 3,500 Coil visits, which was of course MUCH more than I ever anticipated. I’m averaging well over 1,000 link clicks for each article, so it feels good that I’m sending over 1,000 people to Coil every day. I would LOVE to see Coil and the whole web-monetization movement succeed and I really enjoy being part of the early days of it.

XRPTwin:
How much fun is it to write your stories and do they cost a lot of time?

XRP the Standard Productions:
It’s a lot of fun … I’m constantly cracking myself up, so even if no one else laughs, at least I’ve had a good time. It takes anywhere from 30 minutes to a couple of hours to get these satirical articles right. If I do any photoshopping, that adds to the time as well. Full disclosure: This is definitely a fun labor of love at this point and not a money-maker.

Funny Part from: Christine Lagarde Proud of Herself for Not Mentioning Ripple During ECB Speech

XRP the Standard Productions:
David Schwartz’s reaction was my favorite, of course. Digital Asset Investor has also gotten a kick out of the articles and has been quite kind in talking about them in his videos from time to time. I am continually amused by people who post things like, “FUD!” and “Fake News!” especially when the article is blatantly satirical on its face.
A few people have even said stuff like, “Coil is becoming the site for FAKE NEWS!” I must admit, that bothers me a bit, because I truly think that satire is often quite witty and honorable and is not even remotely in the same realm as harmful fake news. Luckily, those sentiments are few and far between. 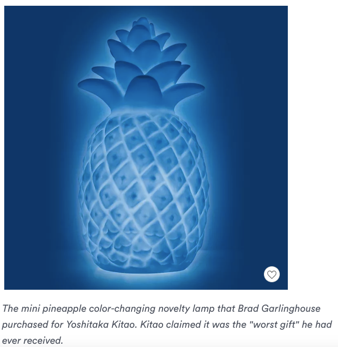 XRP the Standard Productions:
you feel better overall after having written it.

XRPTwin:
Is there a deeper meaning behind the blogs?

XRP the Standard Productions:
I would put my articles in three categories:

XRPTwin:
When you read, ‘you should take content down, because, although Satire, new people investing in XRP could interpret this the wrong way’ …. Does this make you move towards the DELETE ALL button?

XRP the Standard Productions:
NOT AT ALL ! ! ! In fact, this is a passionate subject for me. Satire is always going to have the potential of confusing certain individuals and catalyzing a spectrum of responses. The effectiveness of the satire is a matter of opinion and will always be up for scrutiny, however the freedom of the author to post the satire should never be breached. Satire written on ANY subject has at least the possibility to cause some amount of confusion for newcomers (like ‘The Onion’ posting a satirical political piece), but a human being with basic intelligence realizes the satire quite quickly. 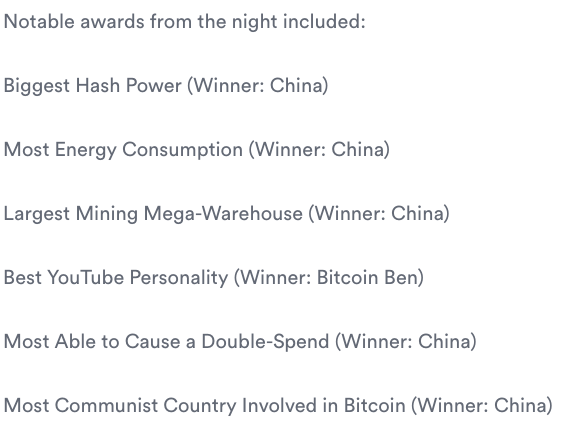 There you have it . . . I seriously think XRP the Standard Productions’ Blogs are far from the truth and are very clearly FAKE.

In times we all need to laugh, because our investment took us more South than we wanted to, it is absolutely a big salute to the content creator for sharing this magic: that gives us a smile on our faces; as long as you know it is SATIRE

The Standardization Solution to Frictionless Payments

The Standardization Solution to Frictionless Payments

In society today it’s safe to assume that composing, sending, receiving and interpreting email is second nature. We do...

The Global Shift to Explore CBDCs

Unsurprisingly, the pandemic has driven many of us to rely on digital forms of payments over  cash. In fact,...

Today, we’re excited to announce our partnership with the National Bank of Egypt (NBE), the North African country’s largest...

https://www.youtube.com/watch?v=IZwBLBN76Ug In this first Ripple Drop for 2021, we explore the power of RippleNet to transform businesses, how RippleX...

Will CRO Coin Ever Recover? What Crypto.com Must Do NOW!

Why People Are Flooding To Cardano (ADA) | And why YOU Should Too! | Crypto Analysis

Bitcoin Consolidates Above Support, Here’s What Could Trigger Fresh Rally

Bitcoin Consolidates Above Support, Here’s What Could Trigger Fresh Rally

Nearly 1% Of Bitcoin Supply Is Now Wrapped In Ethereum